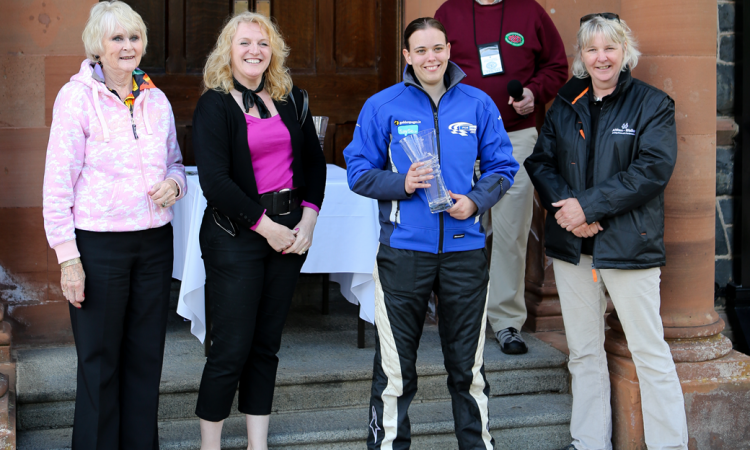 Third place for Mullan at Cultra

Northern Ireland’s Thoroughbred Sports Car Club hosted their annual Cultra Hillclimb around the grounds of the Ulster Folk and Transport Museum just outside Belfast. The theme for the 2013 running of the annual event was celebrating women in motorsport and the organisers had arranged for some distinguished guests to honour the event on the day including former Ladies World Rally Champion Louise Aitken-Walker and multiple race and rally winner Rosemary Smith.

Jennifer Mullan joined the seven other female competitors taking part and had originally hoped to use her SaySo.ie and MobileReady.ie supported Formula Sheane on the event. However a gearbox issue developed during testing for the next round of the MicksGarage.com Formula Sheane Championship on the Friday before the event unfortunately meant her car could not be repaired in time. A last minute kind offer from Fel McIlroy to use her Mazda MX5 for the event meant that Jennifer wouldn’t miss out on taking part in the unique event.

Saturday morning was met with pleasant clear sunny skies and quickly practice got underway. Due to the mixed array of cars entered in the ladies class for the weekend ranging from a Ford Sierra to a Formula Ford, a handicap system had been devised by the organisers to calculate a balanced result based on an average of the practice and two fastest run times over the day. Jennifer quickly got to grips with the Mazda MX5 and it didn’t take her long to get the car into some interesting angles over the course of the day as she powered her way up the hill. At the end of the day, scratch times put Jennifer fifth fastest with about ten seconds splitting the eight ladies, however with the handicap applied, less than one second split the field. All the ladies were called to the front of the Manor for the awards presentation with Rosemary Smith and Louise Aitken Walker on hand to present the prizes. Jennifer was awarded third in the ladies class just 0.07 seconds behind second placed BWRDC’s hillclimb champion Jo Hodgson.

Speaking after the event, a clearly delighted Jennifer complimented the organisers on a fantastic event: “I’m absolutely delighted to have finished third today! Yesterday afternoon my weekend was over when we developed the gearbox issue and despite my team doing everything possible they were unable to resolve the issue. However thanks to the kindness of Fel McIlroy I still got to compete today and had a ball! Well done to everyone at TSCC for a super day today and of course to my sponsors SaySo.ie and MobileReady.ie who are supporting me so well this season.”

Jennifer’s next event will be rounds four and five of the MicksGarage.com Formula Sheane Championship at Mondello Park on Sunday 9th June. Follow her progress throughout the season on www.jennifermullanracing.com