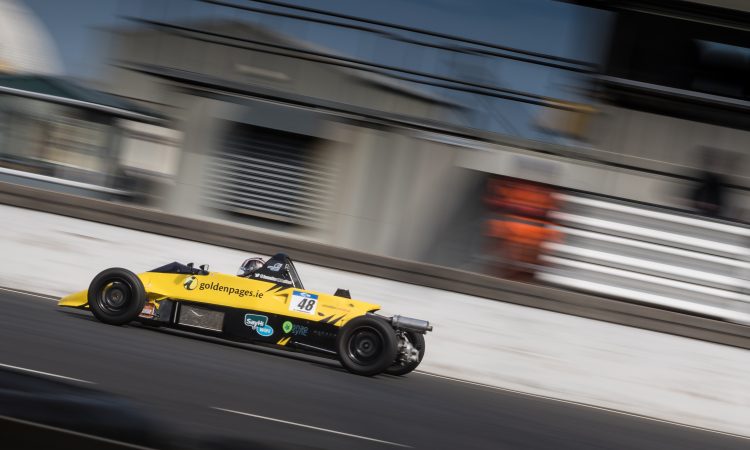 Success for Mullan at Bishopscourt

Bishopscourt Circuit in County Down was the venue for rounds three and four of the All Ireland Formula Ford 1600 Championship. Since motor racing returned to Bishopscourt in 2012 Jennifer has always relished competing at the track located just a short distance from where she was born. A very successful mid-week test at Mondello Park would see Mullan travel north full of confidence to continue her assault on the Pre-87 class of the All Ireland Formula Ford Championship.

With Bishopscourt running its International track layout for the first time, a 30-minute test session on Saturday morning gave Jennifer a chance to familiarise herself with the circuit. Heavy rain over night left conditions tricky for the early morning session with the back of the circuit remaining wet while the front half was dry but none the less, Jennifer was happy with the progress made. Dry conditions for the afternoon’s qualifying session were exactly what Jennifer had hoped for and she managed to place her car on the second row of the grid in fourth place for both of Sunday’s races.

The first race of the weekend took place on Sunday Morning and a lightening start from Jennifer would see her lead a Formula Ford race for the first time approaching the first corner. Applying a bit too much caution on a damp track would allow David Nicholl past, dropping Mullan to second before the red flag came out for an incident on the start line. Another good get away on the restart promoted Jennifer to second briefly before slipping behind Nicholl. Now locked in battle for the final podium spot with James Graham and Brendan Duggan, Mullan dropped to fourth place before pressuring Graham into a mistake to reclaim third where she would cross the line to take her first overall podium and the Pre-87 Class win.

Another blistering start in Race 2 put Mullan once again into the lead when the red lights went out. This time approaching the first corner, Jennifer and her goldenpages.ie backed Reynard had pulled a few car lengths clear of the others and remained unchallenged until the field made their way out onto the International loop. Sean Lilis in the newer Ray Formula Ford snatched the lead on the run into the hairpin but Mullan held onto second all the way to the final chicane on the back straight before once again settling into third place, holding off Graham. As Mullan got her head down and started to pull away, an unfortunate problem with gear selection just four laps into the race forced her to pit to try and fix the problem. The team managed to get the car out of the gear it was stuck in allowing Jennifer to return to the track a lap down to try and score a finish in the race. With a problem still evident in the car, Mullan nursed the car around to score some valuable points for second in class and fifth overall.

Jennifer Mullan #48 goldenpages.ie Reynard FF84:
“This last week has been extremely positive for me. A good test on Wednesday put me in a great place going up home to Bishopscourt. Despite the Formula Ford numbers being down this weekend it was great to have mostly older cars like my own to benchmark myself against. Getting my first overall podium was great and I’m sure I would have repeated this in race two had I not had the problem with the car, but these things happen! The team put a fantastic car under me all weekend and I can’t thank them enough! If I could just back up my race starts with some more overall race pace I’ll be laughing! Once again I wouldn’t be here without the support of FCR Media through their brands goldenpages.ie, SayHi WIFI and Snap Sync, so a massive thanks to them.”

The Irish Formula Ford Championship now heads into a summer break and will resume on August 9th & 10th at Mondello Park, County Kildare.