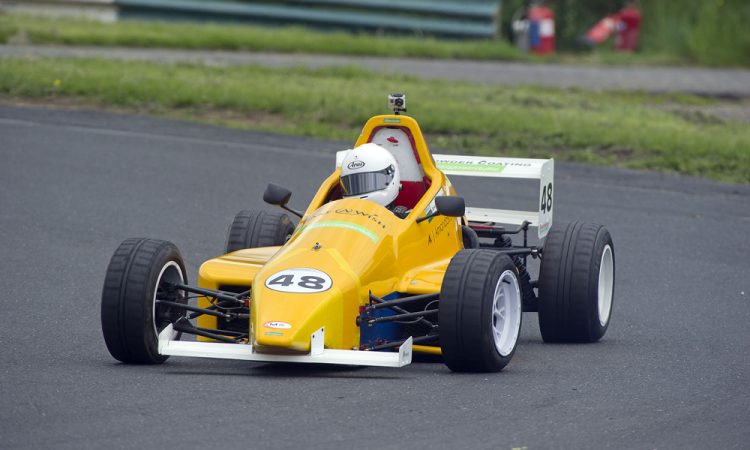 After the excitement of taking part in the Bavaria City Race on the streets of Dublin City Centre along side former Formula 1 World Champion Jenson Button in his Vodafone McLaren Mercedes, just one week later Jennifer Mullan returned to Mondello Park to join the Formula Sheane Championship thanks to a new partnership with goldenpages.ie, specialists in Print, Online and Mobile platform advertising.

Jennifer who is using this season to prepare for a full campaign in the 2013 Formula Sheane Championship was really looking forward to the weekend to gain further experience with the unique characteristics of the Wicklow-built Formula Sheane.

After a disappointing pre-event test, Jennifer went into qualifying hoping some sound advice from some of the championship’s best drivers would lead to an improvement in her times. Right from the start Mullan got up to speed and was quickly beating her previous day’s testing times. By the end of the session she had taken 3 seconds off her best efforts in testing and was now brimming with confidence as she knew where she could find even more time.

Lining up 10th on the grid just ahead of fellow championship newcomer Fergal Driver, Mondello Park’s ‘Become a racing driver’ winner Timmy Swail and TodayFM presenter Anton Savage, Jennifer was aiming to get a good finish and stay with some of the mid-field regulars ahead of her. More importantly, she wanted work on getting her lap times down even further and gain further valuable experience. Mullan got a good start and challenged John Linnane coming into the first corner. With the super fast pair of Savage and Swail now past and making their way up the field, Jennifer set about chasing down Fergal Driver and another newcomer to the series Brian Melia. Getting into a good rhythm, Mullan’s lap times once again began to fall and she reeled in and passed Driver with a superb move around the outside at Ford corner. Jennifer now set her sights on Melia and was getting very close when she had to make way for race leader Kevin Sheane and lost some ground. Despite this she once again managed to reel Melia in and on the run up to Dunlop passed the experienced hillclimb competitor. As the chequered flag dropped Jennifer crossed the line in a superb 8th position and had managed to take another second off her personal best lap time leaving her full of confidence as the championship takes a break until the next round at Mondello Park on Saturday 21st & Sunday 22nd July.

After the race, Jennifer commented on what had been a very positive weekend, “naturally I was disappointed that I wasn’t getting much faster in testing yesterday. Overnight I got some brilliant advice on how to drive the car which has paid dividends today. I’m really looking forward to getting back out in the car as I’m confident now we are going in the right direction.”

Jennifer would like to say a special word of thanks to her sponsors goldenpages.ie, amandakevlin.com, p1digital.ie, motorsport.ie and Sheane Cars for their support in 2012.