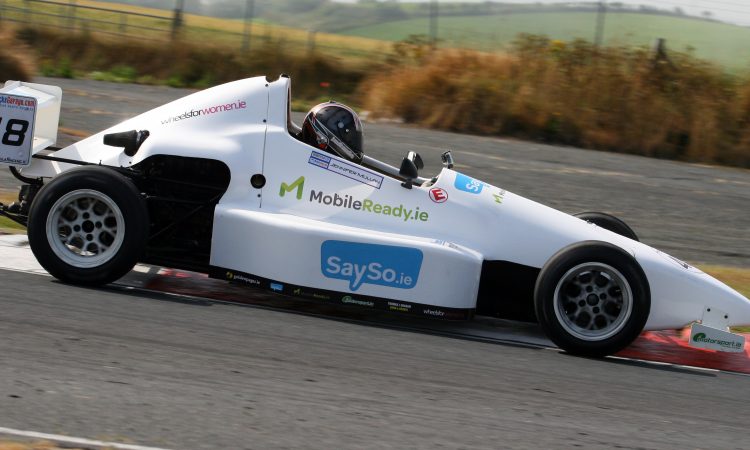 Riding the crest of a wave, Jennifer Mullan was enjoying her best run to date with four podium finishes in a row in the 2013 MicksGarage.com Formula Sheane Scholarship Championship. Getting to grips with her SaySo.ie & MobileReady.ie supported Formula Sheane thanks to the efforts of her FCR Media Racing team, Jennifer moved to one of her local circuits, Kirkistown for round eight of the championship.

Having suffered from ongoing brake problems in testing, Mullan’s team worked hard to resolve the issue before Saturday morning’s 15 minute qualifying session. As she went out on track, Jennifer felt better in her car and confident of securing a reasonably strong time in qualifying. At the end of the session Mullan had done enough to qualify her car tenth on the grid but reported that her braking issues had returned from the midpoint in the session hindering her efforts to set a faster time.

Despite reports of heavy rain in the area, the Newtownards circuit remained dry for the afternoon’s race as Jennifer pulled up to her tenth place grid spot. With her team continuing to try and get to the root of her ongoing braking problems, Mullan was keen to get a good start and make some good progress early in the race. As the lights went out, Jennifer did indeed get a lightening start moving up to fifth position at the end of the opening lap, largely benefitting from a first corner incident up ahead of her. Now in a comfortable class lead, Mullan got her head down to retain her advantage as some of the lead drivers started to work their way back up the order. During the middle of the race Jennifer enjoyed a superb battle with former Fiat Punto champion Richard Kearney. However, Mullan spotted championship rival Stephen O’Keeffe closing in so decided to allow the faster Kearney past and work with him from behind to rebuild her advantage. Coming onto the final lap of the race, Jennifer now once again had to nurse her car home as the braking issue, which had hampered her progress throughout the weekend had returned. However coming out of the final hairpin Jennifer had done enough to maintain her best finish of the season crossing the line in sixth position overall and winner of the Scholarship class.

A clearly delighted Jennifer spoke about her best weekend so far after the race, “this has been an absolutely fantastic weekend. I’ve been struggling with brake issues all weekend and the guys at FCR Media Racing did everything they could to try and get to the root of it. However I did my best to drive around the issues as they crept in and all our efforts have been rewarded with my first class win. A massive thank you to my wonderful sponsors, SaySo.ie, MobileReady.ie, goldenpages.ie, wheelsforwomen.ie, motorsport.ie, Thomas J. Graham Sand & Gravel, Clane Motor Factors and Murray Motorsport. I can’t wait to come back here at the end of August now!”

Jennifer and the FCR Media Racing Team return to Kirkistown for rounds nine and ten of the 2013 MicksGarage.com Formula Sheane Scholarship Championship on Saturday 31st August. You can follow Jennifer’s progress on www.jennifermullanracing.com and on twitter by following @jennifercmullan