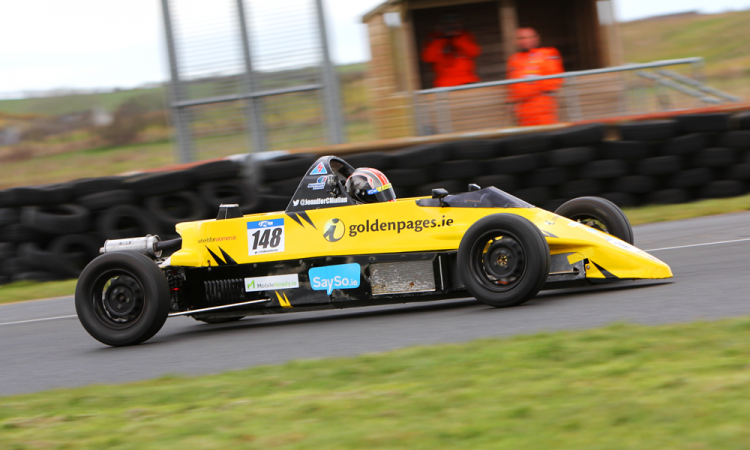 On the eve of the opening round of the All Ireland Formula Ford Championship in Kirkistown, Jennifer Mullan announced her plans to take on the Pre-87 class in her Reynard FF84 for the ten round championship. Mullan renewed her partnership with FCR Media Racing to carry the iconic goldenpages.ie brand once more, joined by two of the companies’ latest exciting products, SayHi WIFI and SnapSync.

Friday testing turned out to be limited for both Jennifer and her Reynard when a gearbox failure on the opening lap required a lengthy spell in the pits. After a great effort from the team, Mullan was able to end the day with a short session to shake the car down ahead of the following day’s action.

Saturday morning’s qualifying turned out to be mixed weather wise, starting dry but very windy. After the opening laps it became clear Jennifer was struggling for pace due to a misfire in her engine and after just a few laps the red flag came out as unfortunately another driver made contact with Mullan coming out of the hairpin. When the session got back underway, Jennifer was able to rejoin but a small shower of rain made it impossible for any driver to improve.

Starting the opening race of the weekend from 15th on the grid, Jennifer got a great start making it up to 13th place on the run to Debtors. Continuing to settle back into the car after the winter break, Mullan went on to finish race one in 14th overall and took her first piece of silverware this year with third in the Pre-87 class.

The second and final race of the weekend would once again see Mullan start from 15th place. Jennifer got her head down early in the race and set about improving on her earlier performance. With her lap times falling closer to where they ended in 2014, Jennifer ended race two in 12th place and again third in class, rounding off a challenging but positive weekend.

Jennifer Mullan – #148 Reynard Formula Ford FF84:
“This weekend was a bit of a baptism of fire with a lot of bad luck that no one could predict. Losing the majority of Friday testing due to a freak gearbox failure really put us on the back foot as we had a number of items that we needed to get through. However I am confident that with some further testing scheduled before heading to Bishopscourt, we can be back fighting where we should be once again. A massive thanks must go to all the guys at FCR Media Racing, my sponsors goldenpages.ie, SayHi WIFI and Snap Sync for their support.”