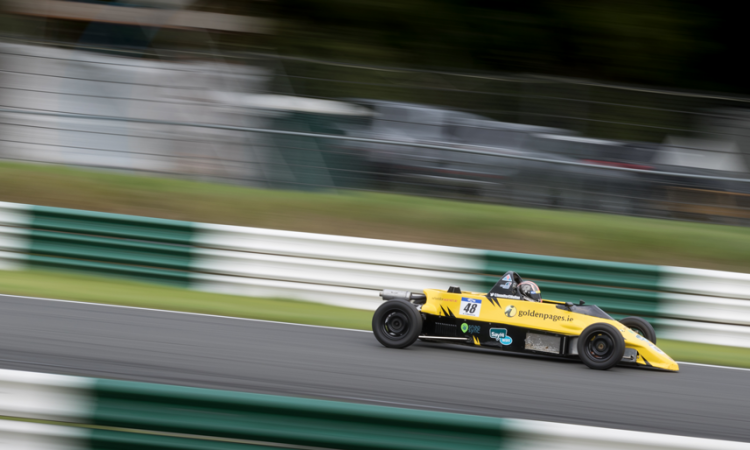 Jennifer Mullan returned to action in the All-Ireland Formula Ford Championship this weekend for her first visit of the year to Mondello Park. Currently leading the Pre-87 class in the series, Mullan was keen to extend that lead in her goldenpages.ie Reynard Formula Ford.

Jennifer got her weekend off to a superb start in Saturday’s pre-event test. Working hard on a number of areas with her team, by the end of the day Mullan had taken over a second off her previous personal best lap time around Mondello’s National circuit.

Bouyed by her new found confidence, Jennifer approached qualifying on Sunday morning aiming to pick up where she left off on Saturday. Despite missing out on repeating her previous personal best by a couple of tenths of a second, Mullan placed her SayHi WiFi supported Reynard seventh on the grid but crucially first of the Pre-87 class entries for both of the days races.

Despite some wheel spin causing a less than perfect start off the line, Jennifer held onto her seventh position at the end of the opening lap. Now locked onto the faster lead group, Jennifer started to challenge for sixth with Formula Ford veteran Dennis Sheehan. Quickly finding a way past under braking into the last corner. Jennifer was now forced to defend her newly achieved position over the following laps, but a spin by Sheehan would hand the Wheelsforwomen.ie blogger a comfortable advantage to take her first class win of the weekend and sixth overall.

Making amends for race one, Jennifer got a much better start to move into sixth on the run to the first corner before slipping back into seventh place. In the final few laps of the race Jennifer  closed the gap to Dennis Sheehan in sixth plaace and on the final lap, Mullan set herself up for a move on Sheehan down the main straight to the chequered flag only to be just piped to the post by a mere one tenth of a second.

Jennifer Mullan – #48 goldenpages.ie Reynard FF84 Formula Ford 1600:
“I really am delighted with the weekend as a whole. To come away having extended my Pre-87 Championship class lead is great, but I am more pleased with the progress I’ve made with my pace and consistency. A huge word of thanks has to go to my team as they never stopped pushing me to get the best out of myself and the car. It’s great to have so much support also from goldenpages.ie, SayHi WiFi, SnapSync and WheelsforWomen.ie to help me push on now in the last four races where I can hopefully wrap up the All Ireland Formula Ford Championship Pre-87 title.”