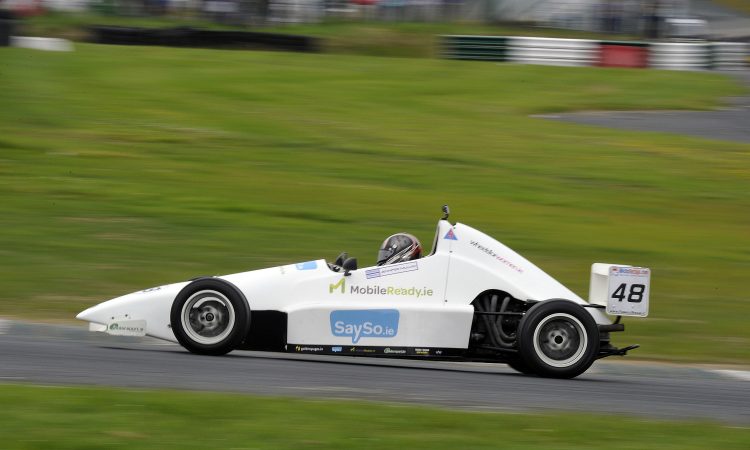 Last month Jennifer headed to Mondello Park to compete in the 45th anniversary celebrations for the County Kildare venue. Looking for some strong results to close the gap in the Micksgarage.com Formula Sheane Championship, Jennifer managed a personal best qualifying lining up in the top ten and fourth in the scholarship class in her SaySo.ie/MobileReady.ie backed car. A race long battle with Aidan Byrne would see Mullan cross the line in ninth overall and take her first podium in the scholarship class after running as high as seventh during the race.

Grid positions for the second race were based on the driver’s fastest lap from race one and this would see Jennifer taking up the same starting position as race one. A slow couple of opening laps would allow Aidan Byrne to get ahead of Mullan but not one to give up she quickly caught up to the battling Byrne and Eoin Crowley and managed to slip past Eoin after some contact between the two in front. Jennifer crossed the line in eighth place overall and again third in class, just missing out on second place by a mere 0.16 of a second after a frantic last few laps defending from Crowley but trying to find a way past Byrne.

Brimming with confidence, next up on the calendar for Jennifer was the Formula Vee festival back at Mondello Park. Setting yet another personal best qualifying time and lapping under the minute bracket Jennifer put her wheelsforwomen.ie supported car in ninth spot on the grid and second in class for the opening race of the weekend. A great start to the race meant Mullan held her position on the opening laps of the race until a mistake at turn 3 saw her tumble down the order to last place. With nothing to loose Jennifer went on a charge through the field gaining a position on almost every lap. Quickly she found herself back up to third in class. Unfortunately the gap back to her starting position was just too big to close and she crossed the line to continue her podium streak in third.

For the final race of the weekend the SaySo.ie/MobileReady.ie car would line up as it did in race one. Jennifer held her position for the first few laps until going off track to avoid another spinning car at turn two. Once again Mullan found herself at the back of the order with a lot of work to do. After a superb drive back through the pack Jennifer got herself back up to second in class with just three laps to go and was set for her best finish to date but luck wasn’t on her side and a small spin at turn four would see Jennifer cross the line in ninth overall and yet another third place in class for her efforts.

Speaking after a tough weekend Jennifer commented, “I really didn’t make things easy for myself this weekend, I have shown some great pace and I am improving every time I get in the car. I’m a little disappointed that I didn’t manage to finish second in both races as the speed was there, just not the consistency but I know I can do it now so I will use the experience going into the next round at Kirkistown in three weeks and see what we can do. “