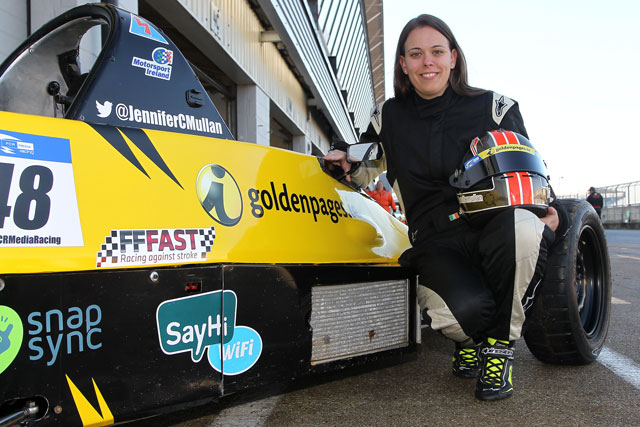 Jennifer Mullan has received an extra boost as she prepares to travel to Australia in March to join Ecurie Australie for the Phillip Island Classic, having received the support of Irish Motorsport’s governing body – Motorsport Ireland, for her participation in the famous Formula Ford event.

Having developed a friendship with Ecurie Australie’s Chris Davison during her participation in the Walter Hayes Trophy at Silvestone, the Australian was impressed by her commitment to the sport and keen to have her join his famous family team for the annual event.

Jennifer will race one of the team’s Reynard FF84 Formula Ford 1600’s, a similar model to the one she has used to good effect over the past two seasons in Ireland in the Champion of Mondello Park series in 2014, followed by the All Ireland Formula Ford 1600 Series in 2015.

Run over three days, the Phillip Island classic begins on Friday 11th March and will be run over five races during the weekend. As she makes her final preparations to travel to Australia, Mullan, thrilled to have the support of Ireland’s governing body feels confident she can put on a strong display during her first visit ‘down under’.

Alex Sinclair – CEO, Motorsport Ireland:
“Jennifer is a great ambassador for our sport and we are thrilled that we have such a strong competitor that can inspire not only other young women but also all competitors to reach higher and achieve their Goals. All of us at Motorsport Ireland wish her the best in Australia and look forward to receiving the reports from the Phillip Island Classic in March.”

Jennifer Mullan – Driver, Ecurie Australie:
“I am delighted to have the support of Motorsport Ireland for my trip to Phillip Island next month. It was already a huge opportunity given to me by Chris Davison and Ecurie Australie to compete at this famous event, but to now also be representing Motorsport Ireland at an international level is a great honor. I can’t thank everyone involved enough for making this trip happen and I look forward to doing the best job possible.”