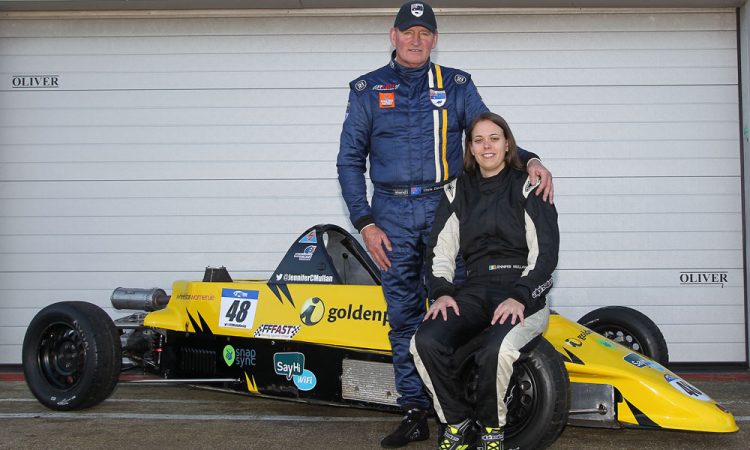 2015 All Ireland Pre-87 Formula Ford 1600 Champion Jennifer Mullan is set to add an international dimension to her motor racing portfolio when she makes the journey to the famous Phillip Island circuit in Australia next March.

Jennifer will join the family run team Ecurie Australie to participate in the hugely popular Phillip Island Classic event, running from Thursday 10th to Sunday 13th March 2016. The historic festival of motorsport is set to host a grid of over 50 Formula Ford 1600 race cars, with all participants using cars older than 1990. Jennifer’s car for the event won’t be too unfamiliar, as she will be entering the event in a 1984 specification Reynard Formula Ford, similar to the one she has successfully campaigned in Ireland and the UK during the last two seasons.

Invited to participate in the event by historic Formula Ford enthusiast Chris Davison, Jennifer will pilot the Australian’s own car known as ‘Black Beauty’ along side his daughter Claire Greig in her own Reynard. Chris in his own right is an established competitor, having recently completed a long-standing dream of participating in the Walter Hayes Trophy at Silverstone this year. Davison met Jennifer at Silverstone in 2014 and having been impressed by the enthusiasm of the County Down native, encouraged her to make the trip ‘down-under’ to join his team for this famous event.

Jennifer Mullan – goldenpages.ie Formula Ford 1600:
“This is an absolutely incredible once in a life time opportunity for me. Making the step into Formula Ford was something I had dreamt of, and I feel over the last two seasons I’ve made great progress, which is in no small way down to the help and support of my team lead by Bernard Dolan and Paul Grogan. To have my efforts recognised by Chris with an invitation to compete in Australia is something I would never have even thought would happen in my wildest dreams. I cannot wait to make the trip ‘down-under’ and owe a massive word of thanks to Chris and his family for the opportunity. I’d also like to take the chance to thank my team FCR Media Racing and my sponsors goldenpages.ie, SayHi WiFi, SnapSync and wheelsforwomen.ie for their help this year so far, without their wonderful support, I would not be in a position to take up such an amazing opportunity.”

Chris Davison – Ecurie Australie:
“I first met Jennifer in Silverstone last year when her Reynard caught my eye during testing. As a Reynard fan myself, I had to go and meet her. The enthusiasm and passion she showed towards her racing and her spirit to ‘give it a go’ left a big impression on me, which lead to my decision to invite her down to Australia to compete in my car. We love someone who give’s it their all, and her Australian Fan Club is certainly looking forward to welcoming her to Phillip Island in March for the Classic event.”