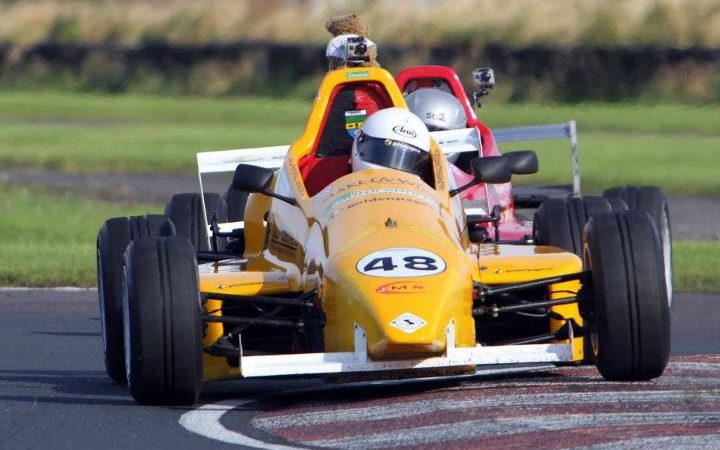 Just one week after an exciting weekend racing around one of Europe’s largest city parks, the Phoenix Park in Dublin, Jennifer Mullan brought her goldenpages.ie Formula Sheane to Kirkistown for the next two rounds of the 2012 Formula Sheane Championship. After a disappointing end to her last championship race at Mondello Park having to retire due to a first corner collision, Jennifer was keen to put on a strong performance at the circuit where her racing career began back in 2007.

Having completed a full days test on the Friday before the event, Jennifer was confident that she had acclimatised herself with the circuit given it was the first time to race there in a Formula Sheane. However Friday’s dry weather had disappeared and with rain falling on Saturday morning approaching qualifying, Jennifer’s team fitted her car with new tyres to suit the wet track’s conditions. As the session got under way it was clear that Jennifer was undeterred by the wet conditions that faced her, something that she had not encountered so far in her racing career. As the session progressed, Jennifer’s times were now falling rapidly and she was starting to make her way up the order. When the official time sheets came out after the session Mullan had put her goldenpages.ie Formula Sheane ninth on the grid for both of the afternoon’s races, a personal best qualifying position so far this season.

As race one got under way Jennifer got a superb start off the line and managed to slip past Chris McCabe on the run down to Colonial corner. With Eoin Crowley finding a way past on the opening lap, Mullan got her head down to stay with the pack. By the half way point in the race, Jennifer had now worked her way up to seventh and was having a fantastic dice with Mick Sammon. As the race progressed, Mullan had now managed to work up a slender advantage over Sammon before a small mistake approaching Fisherman’s corner resulted in her having a small spin onto the grass, demoting her to ninth. Never one to give up, Jennifer got her head down to try and make her way back up the order in the closing stages of the race. As the chequered flag dropped Mullan crossed the line in ninth.

For race two Jennifer once again started ninth on the grid. Buoyed with confidence from race one Mullan was hoping to avoid any mistakes and improve on her race one performance. Once again Jennifer got her P1Digital.ie supported Formula Sheane superbly off the line and was well in the mix approaching the first corner. However Tim Swail and Robbie Allen had come into contact towards the front of the field causing most of the mid pack to run wide in an effort to avoid a collision, which was much to Jennifer’s benefit as she found herself exiting the corner now in fourth place. Mullan who realised it may not be long before the leaders started to work their way back up the grid got her head down to try and hold her position for as long as possible. Approaching lap five, Jennifer was now in a very close mid-pack battle when the Safety Car was deployed to clear debris from the chicane. However while behind the Safety Car, Mullan discovered an issue with her brakes and went for the pits to see if her team could fix the issue. Unfortunately a leaking brake line at the rear of the car was found to be the cause of the issue resulting in Jennifer being forced to retire from the race while challenging for seventh position.

Speaking after the race, Jennifer expressed her delighted at the weekend overall despite having to retire from race two, “this weekend has been really good for me. I’m delighted that I’ve been able to get my times down further this weekend and run in the middle of the field all weekend. Obviously I’m bitterly disappointed not to have taken better finishing results from both races, but I believe I can take this experience and hopefully put it to great use at my next event in Mondello Park where we will be racing for the Leinster Trophy. I’d like to take this opportunity to thank my fantastic sponsors for their support so far this season including goldenpages.ie, P1Digital.ie, amandakevlin.com, motorsport.ie and wheelsforwomen.ie, all who are playing a vital part in keeping me on track in 2012. Of course, I also wouldn’t be competing so well without the help Sheane Cars who prepare my car so well for each race.”

Jennifer’s next event will be in Mondello Park on Saturday 15th & Sunday 16th September where she will be racing for the famous Leinster Trophy.