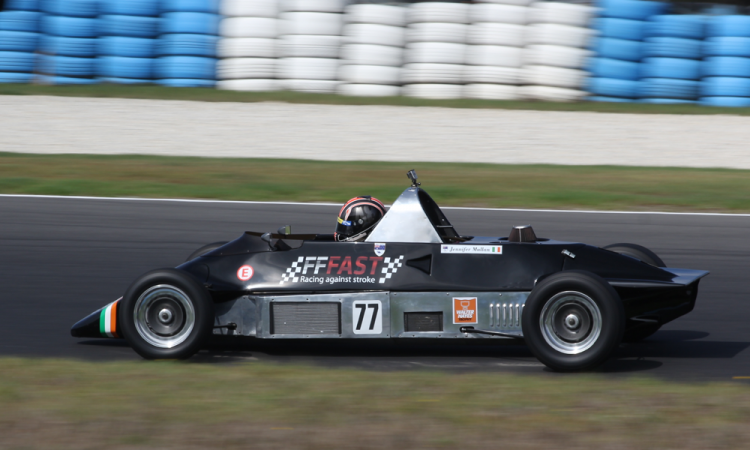 County Down native Jennifer Mullan made her international motor racing debut last weekend, travelling over 7000 miles to Australia to compete at the Phillip Island Classic. Jennifer’s trip came about following an invitation to join the famous Ecurie Australie Team from Chris Davison, who along with his brother Richard and the extended Davison family have resurrected the team, originally setup by their father, Australian Formula 1 driver Lex Davison.

Jennifer was behind the wheel of one of the team’s own Reynard FF84, similar to the car she has used between Ireland and the UK for the past two seasons.

The event got underway on Thursday morning, with the first of three test sessions. It seemed Jennifer packed the Irish weather however, as her first laps of the famous former Grand Prix circuit were in heavily wet weather conditions.

From there, Jennifer settled in, adjusting both herself and the cars setup to her liking ahead of Friday morning’s qualifying. However, Mullan would hit bad luck, as an engine issue hampered her progress throughout the qualifying and first two races over Friday afternoon and Saturday morning. A trojan effort from her Ecurie Australie Team solved the issue, and by Saturday afternoon, Mullan who was now starting from 41st position on a grid of nearly 50 cars had her first chance to show what she was really capable of.

Due to a packed programme of races, most of the weekends sessions were cut from 6 laps to three or four, but it was Sunday afternoon’s final race of the weekend where Jennifer would really shine.

Locked in battle with some of the local stars, Jennifer continued her progress from races three and four to eventually finish a credible 24th in race five from the large 48 car entry.

Jennifer Mullan – Ecurie Australie Reynard FF84:
“This has just been the most incredible experience of my life so far. To share such a journey with the most incredible people has been amazing! I am very happy with my results, I really didn’t expect to be as far up the grid as I was. To end the weekend up in 24th really exceeded my expectations. I can’t thank the Ecurie Australie family enough for the opportunity and to Motorsport Ireland for supporting my trip down under!”