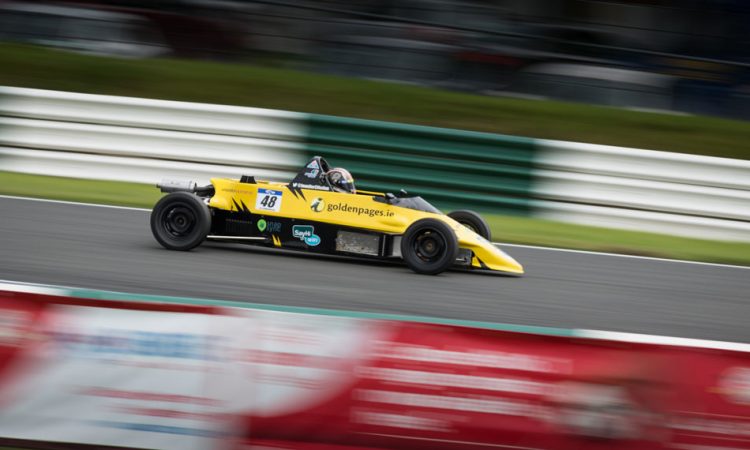 Just three weeks on from one of her best performances to date in Kirkistown, Jennifer Mullan brought her goldenpages.ie Reynard Formula Ford to Mondello Park for the final rounds of the 2015 All Ireland Formula Ford 1600 Championship. Lying in a comfortable first in the Pre-87 class, Mullan’s attentions had focused onto securing third overall in the main championship.

A tricky run in testing had dinted the County Down native’s confidence going into qualifying. However, putting that behind her, Jennifer placed her car in eighth place for Saturday’s opening race of the day.

As the lights went out for race one, Mullan slipped back to ninth as the field exited the first corner. However tucking herself under the gearbox of rival Ivor Mairs, Jennifer reclaimed the position just one lap later with a brave move up the inside at turn two. Now setting herself up to charge forward, Jennifer was forced to keep one eye in her mirrors as her Reynard rival was keen to continue the battle for position. Just after the half way point in the race, Mullan was able to fully focus her attentions on reeling in the lead pack after a failed attempt at the newly named Southside Motor Factors last corner from Mairs left him in the gravel. Taking the chequered flag in fifth position, Jennifer won the Pre-87 class and strengthened her position in the championship.

Looking to finish her Saturday off in style, Mullan made a superb start to the race, flying past Denis Sheehan’s Crossle and briefly challenging British National Formula Ford Championship regular Patrick Dussault. Tucking herself in behind the Canadian, Jennifer initially utilised the speed of his newer Ray to open a gap ahead of her rivals that she would maintain to the end and with it, her second Pre-87 class victory of the weekend.

Her pair of strong finishes allowed her to secure the Pre-87 Class Championship victory and also third overall in the series, just one position behind her vastly experienced teammate Jonny McMullan who became the 2015 Overall Champion.

Jennifer Mullan – goldenpages.ie Reynard Formula Ford FF84:
“I struggled a lot today for pace but I still took two Pre-87 wins, wrapped up the class championship and took third overall in the All Ireland Formula Ford Championship! I can’t thank everyone enough for all the hard work this season, big progress has been made despite the fact we’re not going so well this weekend. This success is a credit to the support I have from my team, FCR Media Racing and my amazing sponsors goldenpages.ie, SayHI WiFi, SnapSync and wheelsforwomen.ie.”